The Promises of Spring 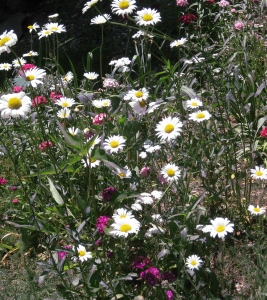 On this relatively mild, sunny March day (mid-thirties), after an obnoxiously long and brutally cold/snowy winter, I can’t stop daydreaming about flowers and butterflies and spring and the warmth of summer to come. Yes, there still are several feet of snow on the ground. But just in the past few days, the gravel of our driveway has emerged in places where inches of ice and packed snow once lived. Hope!

Yes, I should be writing. And I will get back to that when I’m done here. I’m trying something different with my new novel, Gram and Me. Usually I have a general idea for a story in my head, start writing, and just let the story tell itself. That worked with Autumn Colors and In Her Mother’s Shoes. I received lots of favorable reviews for both, and continue to sell books. But they were lacking something – that “something” that makes an agent sit up and say “I want to represent this author and her book!”

Self publishing is a wonderful opportunity for authors that was very limited and costly until the last 10-15 years. Now it is easy and relatively inexpensive, depending on the route you take, to publish your own book. But, as I’ve said in past posts, with that opportunity comes a deluge of books that are poorly edited and not very well constructed. Not all of them, by any means. But enough that there still is that belief that the author self published because their books weren’t good enough to meet the expectations of agents and traditional publishers. Some established writers have chosen to self publish after years in the traditional marketplace because, quite frankly, self-published authors can make a lot more money per book than in traditional publishing. But without a large base of fans who will buy your book – no matter where it is published – because you’ve already proven yourself to be a writer of popular, enjoyable books, the average self-published author’s books often languish on shelves, and he/she doesn’t sell enough books even to cover their own costs for publishing and marketing/promotion.

Because of this, I still feel that winning the support of an agent and a contract with a traditional publisher is the Good Housekeeping Seal of Approval on your book, at least when you are first starting out. I want that Seal of Approval.

And so, I’m approaching Gram and Me differently. I’m outlining the major plots and sub-plots first. I’m meeting and learning about my characters – what they look like, their strengths and flaws, their desires, goals and fears – before one word about them goes into the story line. I’m planning out their obstacles and challenges, their supports and friends and loved ones.

That’s not to say I might not tweak my plans as I live with the characters and they go through their story. I probably will. But I want to have a solid foundation for whatever they experience and how they deal with whatever life throws at them.

This approach may take me longer. Or maybe, after all this foreplay, the actual writing of the novel will take less time than usual. I have not idea, since I’ve not done it this way before.

But rest assured you’ll all be the first to know how I’m progressing!

I, like so many others, am a novelist struggling for recognition. MY NEW NOVEL, THE EYES HAVE IT, IS AVAILABLE ON AMAZON AND B&N! In Her Mother's Shoes was published in June 2013 - available through Amazon, B&N and iPad, e-book (only $2.99!) as well as paperback. Autumn Colors was my first. My third novel, Star Catching, was released in November, 2016 and has been very well-received! My writings are mostly women's fiction, most also suitable for YA. My website is www.dawnlajeunesse.com. Come visit me there!
View all posts by Dawn Lajeunesse →
This entry was posted in Uncategorized and tagged agents, Autumn Colors, butterflies, flowers, In Her Mother's Shoes, novels, Publishing, Self-publishing, Spring, summer, Traditional Publishers, writers, writing. Bookmark the permalink.