Posted on September 19, 2016 by Dawn Lajeunesse

I’m excited to share with you the upcoming release of Gloria Waldron Hukle’s newest book and final piece of the “American Waldron Book Series” on October 11, 2o16! 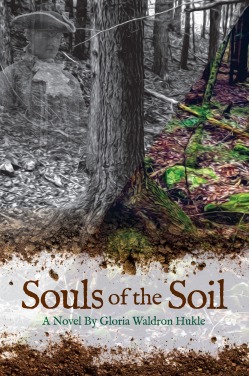 “Souls of the Soil” is one tale within another; a contemporary novel that questions the meaning of reality converges with well-researched historical fiction, the whole body of the book inspired by an actual murder in Upstate New York in the year 1756 during the French and Indian War and the discovery of a local family cemetery plot centuries later.

But Gloria Waldron Hukle’s final slice of her “American Waldron Book Series” opens long before blood drips from the blade of a sharpened rusty bayonet.

The lives of two sets of fathers and sons, all four of whom share the same DNA, crisscross between centuries in this last of the four book series that began a decade ago with “Manhattan: Seeds of the Big Apple.”

“Souls of the Soil” starts in the year 1679 as Cornelius Vandenberg, a badly burnt, disheartened Dutch immigrant farmer living on Papscanee Island near Albany, laments his loss of everything. It is November on the crystal covered, scorched fertile land, long held sacred by the indigenous peoples. As the fire smolders, the angry immigrant wonders how he can go forward.

Thus begins the never-ending quest for happiness and meaning, the trek continuing many centuries and generations later in 2014 with the reconciliation of family members brought together by the unexpected death of a close friend.

Further information visit: www.authorgloriawaldronhukle.com. The book also can be pre-purchased at her daughter’s secure business website: http://www.heavenlyhollowdist.com by clicking on the book image on the first page of the site.

I, like so many others, am a novelist struggling for recognition. MY NEW NOVEL, THE EYES HAVE IT, IS AVAILABLE ON AMAZON AND B&N! In Her Mother's Shoes was published in June 2013 - available through Amazon, B&N and iPad, e-book (only $2.99!) as well as paperback. Autumn Colors was my first. My third novel, Star Catching, was released in November, 2016 and has been very well-received! My writings are mostly women's fiction, most also suitable for YA. My website is www.dawnlajeunesse.com. Come visit me there!
View all posts by Dawn Lajeunesse →
This entry was posted in Book Sales, Book Signings, Books and tagged American Waldron Book Series, authors, book promotion, Books, Gloria Waldron Hukle, historical fiction, novels. Bookmark the permalink.