Since late last fall, I’ve been immersing myself in all things Armenian, as I have begun to formulate a direction for my book about Armenian families. Although my childhood was consumed with Armenian foods and practices, I slid away from that after I married and allowed my jobs to consume me. The more I’ve reconnected with my “inner Armenian,” the stronger the pull to be more involved has grown.

I’ve often listened to music as I worked on writing endeavors. Now, as I pursue the preliminary efforts toward envisioning what form the book will take, my music of choice is Armenian folk and dance.

I’ve delighted in revisiting the food of my young and Armenian church-going days, tweaking recipes from my old Rose Baboian Armenian Cookbook until my palate recognizes just the right combination of flavors from those days.

My first culinary adventure was Lahmajoun.

My mother used to describe it to non-Armenians as an Armenian pizza. A mixture of ground lamb, green and red peppers, tomatoes and a long list of seasonings spread thinly on a thin base of bread dough create a one-of-a-kind experience for your palate. Even if you think you don’t like lamb, you should try this!

We never made it at home, but I knew exactly when I hit on my aunt’s cheoreg creation, a yeast roll that is slightly sweet and made unique with a near east seasoning called mahlab. The version in this picture are simple round shapes. But you might also see them rolled into pencil-size ropes that are braided together and/or curled into a pretzel look-alike. 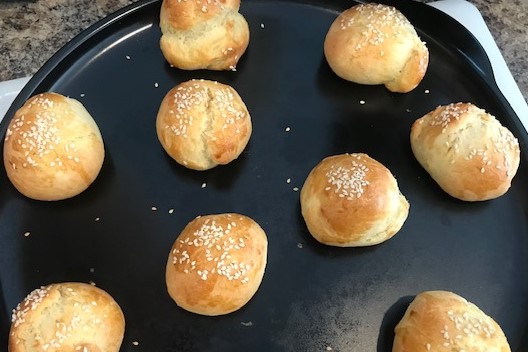 Next up was the Armenian Sugar Cookie (left) and Easter Gurabia (right), both sinful sugar cookies that melt in your mouth for an orally orgasmic experience. These are dangerous if you don’t want to replace your jeans with a larger size!

Sarma and Dolma were on last week’s menu. Sarma is cabbage stuffed with a meat (lamb is best, but others can be used) and rice mixture. When you use the mixture to stuff peppers and other vegetables, it’s called Dolma. 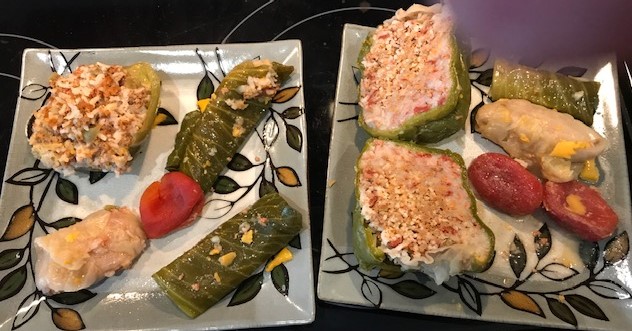 And yesterday I had a delightful experience making Yalanchi with a group of women at St. Peter’s Armenian Church in Watervliet, NY. I joined them for 3 hours during which we made in excess of 1100 stuffed grape leaves! This photo isn’t from that batch, but looks the same, although not piled as high as our group creation! These may look familiar, as they are found on some salad bars and are a culinary concept shared with the Greeks. 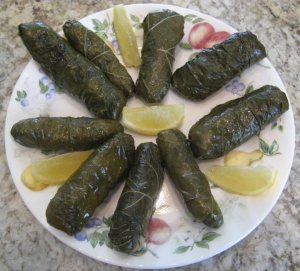 I’ve lost a lot of years of connection with fellow Armenians. But the renewal has been most enjoyable – AND inspiring. Each new experience and person I encounter brings me closer to my original goal: to write about Armenian Americans. But a pleasant bonus has been my enjoyment of reconnecting with my heritage and the welcoming warmth of my widening circle of Armenian friends.

I, like so many others, am a novelist struggling for recognition. MY NEW NOVEL, THE EYES HAVE IT, IS AVAILABLE ON AMAZON AND B&N! In Her Mother's Shoes was published in June 2013 - available through Amazon, B&N and iPad, e-book (only $2.99!) as well as paperback. Autumn Colors was my first. My third novel, Star Catching, was released in November, 2016 and has been very well-received! My writings are mostly women's fiction, most also suitable for YA. My website is www.dawnlajeunesse.com. Come visit me there!
View all posts by Dawn Lajeunesse →
This entry was posted in Uncategorized. Bookmark the permalink.