Literary Potholes in the Road 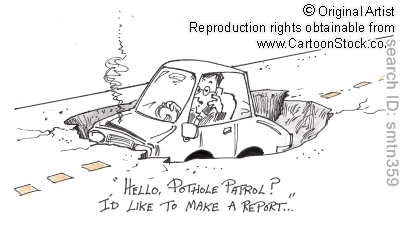 It has been nearly two months since my search for an agent or publisher began for Gram & Me. I have received 22 rejections, most of which were in response to a query letter only, or a query letter plus synopsis. Since the rejections say nothing about the quality of my novel, I’m left (once again) with the baffling question: what makes a query letter work, and/or what do agents really want in a synopsis? How can I present the story line in a way that excites the agent enough to ask for more?

I’ve taken more webinars and on-line courses than I can count, and had individual critiques of both my query letter (which has been revised in response) and my synopsis. And still I can’t get a foot in the door.

Well, that’s not completely true. I did receive one request for the manuscript about six weeks ago. I do understand that manuscript reviews take way more time than query letters. I’d like to hold out hope that this request would be the magic one. I admit to being low on the hope scale, although it’s not over until it’s over, right?

But for those rejections based on the query letter and/or synopsis, just whose advice is right? Each time I revised the letter in response to a webinar and/or critique, I felt (temporarily) confident that at least I’d get a partial reading from it. Not so, so far.

And that dreaded synopsis! One “expert” says just tell the main points of the story without trying to make it a literary masterpiece. Another expert says your synopsis should ooze emotions and feelings.

Since I’ve received close to fifty percent of the verdicts on my first wave of queries, and at least a third of agent websites said they don’t respond unless they are interested, I probably should assume I’ve heard all I’m going to hear (except for that outstanding manuscript).

So what next? Should I patch the potholes in my literary ego and move on to query list

number two? I recall that the author of some massive bestseller (was it Harry Potter or Fifty Shades of Grey? I’ve lost track of all the stories intended to bolster the hopes of aspiring novelists.) received in excess of sixty rejections before some agent or publisher recognized the diamond emerging from the coal.

Or should I move on to other items on my life bucket list?

I guess the fact that I’ve already created that list number two is my answer. This time. If I move through that list and hit the same potholes or new ones, I’ll have to re-assess the road-worthiness of my literary chassis at that point and decide whether it has the strength to go any farther down the bumpy road.

I, like so many others, am a novelist struggling for recognition. My last three novels, THE EYES HAVE IT, IN HER MOTHER'S SHOES and STAR CATCHING, are available in e-book format through Amazon and other formats by request here or on my website. AUTUMN COLORS was my first novel and is still available through Amazon and B&N in multiple formats. My early writings are women's fiction, one also suitable for YA. My work-in-progress is a historical fiction about the Armenians who settled in Troy, NY in the late 19th and early 20th centuries. Come visit me at my website: www.dawnlajeunesse.com.
View all posts by Dawn Essegian Lajeunesse →
This entry was posted in Agents, Best Sellers, Blogs, Publishing, Writing and tagged agents, attitude, authors, Books, critiques, New Novelists, novels, Perseverence, Publishing, writers, writing. Bookmark the permalink.

3 Responses to Literary Potholes in the Road