I am Armenian! I am American!

[Scenes From the Armenian genocide (shaded due to graphic nature): Left-bodies prior to burning; Top right-public hangings; Bottom right-refugees boarding lifeboats at Smyrna] 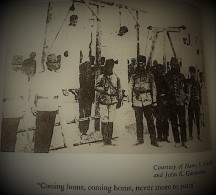 An internet video search of the Armenian genocide returned literally hundreds of videos! And yet so many people don’t even know of its existence.

At least part of the reason for this is that, unlike the Jewish Holocaust, the United States has never officially recognized the murder of 1.5 million Armenians by the Turks of the Ottoman Empire. Why? Despite books and movies depicting it (The Promise was the most recent), and the words on paper and in video of survivors and their loved ones, and actual photos of the horrors, Turkey has denied it ever occurred, claiming it was an isolated occurrence of abuses committed by some officials. Photos, eyewitnesses and survivors prove otherwise. But Turkey, dishonorable as it is even in today’s world, is a member of NATO and officially an ally (though a shaky one) of the United States.
The tentacles of politics strangle acknowledgement of a horror unmatched in modern history until the Nazis.

Did you know that Armenians honored the 100th anniversary of the genocide in 2015? I’m an Armenian, and I missed it. The hatred and intermittent killing of Armenians by the Turks had a long history prior to 1915 and began ramping up systematically around 1895. Lands were confiscated. Threats were common, and all too often were carried out. People disappeared. My own ancestors saw what might be coming and like many other Armenians, began immigrating to America, often via Syria or France, in the late 1800s.

In the early years of the first decade of the 20th century, a change of Turkish leadership provided Armenians with what turned out to be a false sense of security. As was also the case with the Jews, the relative prosperity of the Armenians provoked the envy of their neighbors. The fact that they were of a different religion (Turks were Moslems, Armenians were the first Christians) fanned flames and made Armenians objects of suspicion and resentment. The outbreak of World War I turned these elements into an explosive mixture of hate and fear. Armenians were presented by official propaganda as agents of the Russians and were somehow blamed for Turkey’s military setbacks. The Young Turks portrayed the Armenians as a threat to the state.

April 24, 2015 marks the fatal date when several hundred Armenian intellectuals were rounded up, arrested and later executed. This was the start of the “official” Armenian genocide, a bloody massacre that lasted until 1917.

In addition to 1915-1917, the massacres occurred in 1894-1896, 1909, and repeated again between 1920 and 1923. The scope and ruthlessness of these dates, though, do not compare with the mass slaughter of 1915-1917, which is correctly described as genocide. In his book, “A Peace to End All Peace,” David Fromkin described the terrible fate of the expelled Armenians: “Rape and beating were commonplace. Those who were not killed at once were driven through mountains and deserts without food, drink or shelter.”

What impresses me most as I learn more about the survivors of the genocide was their strength and resilience. Refusing to dwell on the horrors and losses, American Armenians embraced their new country and the opportunities provided here. The final scene in the movie, The Promise, reflects this – watch it, if you haven’t already! The children and grandchildren I’ve interviewed show similar strength, manifested in in their ability to adapt to changing lives, but also in a streak of stubborn independence that is reflected in many life choices, including sometimes a resistance to compromise.

More about this as my journey continues!

My regards to all!

I, like so many others, am a novelist struggling for recognition. My last three novels, THE EYES HAVE IT, IN HER MOTHER'S SHOES and STAR CATCHING, are available in e-book format through Amazon and other formats by request here or on my website. AUTUMN COLORS was my first novel and is still available through Amazon and B&N in multiple formats. My early writings are women's fiction, one also suitable for YA. My work-in-progress is a historical fiction about the Armenians who settled in Troy, NY in the late 19th and early 20th centuries. Come visit me at my website: www.dawnlajeunesse.com.
View all posts by Dawn Essegian Lajeunesse →
This entry was posted in Armenians, Genocide, Grief and Loss, Resilience, Strength, Uncategorized and tagged Armenians, Genocide. Bookmark the permalink.