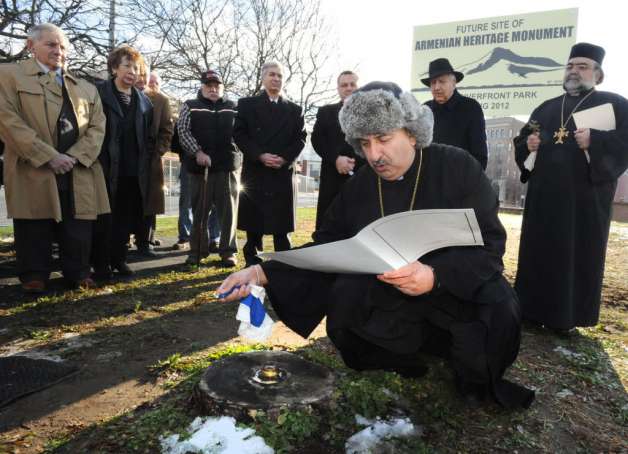 On this date, April 24, in 1915, 300 Armenian political leaders, educators, writers, clergy and dignitaries in Constantinople (Istanbul) were taken from their homes, briefly jailed and tortured, then hanged or shot. Thus began the massive extermination of 1,500,000 Armenians in the waning Ottoman Empire

I couldn’t possibly tell this story any more effectively than as it appeared in The History Place: http://www.historyplace.com/worldhistory/genocide/armenians.htm. This post is excerpted almost directly from that site.

For three thousand years, a thriving Armenian community had existed inside the vast region of the Middle East bordered by the Black, Mediterranean and Caspian Seas. The area, known as Asia Minor, stands at the crossroads of three continents: Europe, Asia and Africa. Great powers rose and fell over te many centuries, and the Armenian homeland was at various times ruled by Persians, Greeks, Romans, Byzantines, Arabs and Mongols.

During the repeated invasions and occupations, Armenian pride and cultural identity never wavered. The snow-capped peak of Mount Ararat became its focal point and by 600BC Armenia as a nation sprang into being. Following the advent of Christianity, Armenians became the very first nation to accept it as the state religion. A golden era of peace and prosperity followed which saw the invention of a distinct alphabet, a flourishing of literature, art, commerce and a unique style of architecture. By the 10th century, Armenians had established a new capital at Ani, affectionately called the “city of a thousand and one churches.”

In the eleventh century, the first Turkish invasion of the Armenian homeland occurred. Thus began several hundred years of rule by Muslim Turks. By the sixteenth century, Armenia had been absorbed into the vast and mighty Ottoman Empire.
But by the 1800s the Ottoman Empire was in serious decline. For centuries it had spurned technological and economic progress, while the nations of Europe had embraced innovation and became industrial giants. As the empire gradually disintegrated, subject peoples including the Greeks, Serbs and Romanians achieved their long-awaited independence.

By the 1890s, young Armenians began to press for political reforms. The despotic Sultan responded to their pleas with brutal persecutions. Between 1894 and 11896 over 100,000 inhabitants of Armenian villages were massacred during widespread pogroms conducted by the Sultan’s special regiments. In 1908, reform-minded Turkish nationalists known as “Young Turks” forced the Sultan to allow a constitutional government and guarantee basic rights.

Armenians in Turkey were delighted with this turn of events and its prospects for a brighter future. But their hopes were dashed when three of the Young Turks seized full control of the government in 1913. This triumvirate of Young Turks concocted their own ambitious plans for the future of Turkey, uniting all the Turkic peoples in the entire region while expanding the borders of Turkey all the way into Central Asia, creating a new Turkish empire, with one language and one religion. The traditional historic homeland of Armenia lay right in the path of their plans. The large population of Christian Armenians totaling some two million persons made up about 10 percent of Turkey’s overall population.

There was a dramatic rise in Islamic fundamentalist agitation. Christian Armenians were once again branded as infidels (non-believers in Islam). Anti-Armenian demonstrations occurred. During one in 1909, two hundred villages were plundered and over 30,000 persons massacred. Sporadic local attacks against Armenians continued unchecked over the next several years.

When WWI broke out in 1914, leaders of the Young Turk regime saw that the outbreak of war would provide the perfect opportunity to solve the “Armenian question” once and for all. Turks disarmed the entire Armenian population. Every last rifle and pistol was seized, with severe penalties for anyone who failed to turn in a weapon.

About 40,000 Armenian men were serving in the Turkish Army. Their weapons were confiscated and they were put into slave labor battalions building roads or used as human pack animals. They suffered a very high death rate. Those who survived were shot outright.

The decision to annihilate the entire Armenian population came directly from the ruling triumvirate of ultra-nationalist Young Turks. The actual extermination orders were transmitted in coded telegrams to all provincial governors throughout Turkey.
After the first 300, arrests of Armenian men throughout the country followed. The men were tied together with ropes in small groups, then taken to the outskirts of their town and shot or bayoneted by death squads. Local Turks and Kurds armed with knives and sticks often joined in on the killing.

Then it was the turn of Armenian women, children and the elderly. They were ordered to pack a few belongings and be ready to leave home, under the pretext that they were being relocated to a non-military zone for their own safety. The were actually being taken on death marches heading south toward the Syrian desert.

Then homes and villages left behind were quickly occupied by Muslim Turks. In many cases, young Armenian children were spared from deportation by local Turks who took them from their families. The children were coerced into denouncing Christianity and becoming Muslims, and were given new Turkish names.

I will talk more about the annihilation of nearly two million Armenians as this series continues. But this post is about the beginning of the official genocide, from April 24, 1915 to the end of WW1, and continuing at a lesser level into the early 1920’s. Please take the time to read the entire article from which this was taken. If you live near where memorial services will be held today and tonight, consider attending. Man’s inhumanity to man knows no bounds. And religious extremes compound that nature. We must strive against attacks on people based on religion or national origin or lifestyles that do not harm others. As Martin Luther King said, judge people by the content of their character.

We must never forget.

I, like so many others, am a novelist struggling for recognition. MY NEW NOVEL, THE EYES HAVE IT, IS AVAILABLE ON AMAZON AND B&N! In Her Mother's Shoes was published in June 2013 - available through Amazon, B&N and iPad, e-book (only $2.99!) as well as paperback. Autumn Colors was my first. My third novel, Star Catching, was released in November, 2016 and has been very well-received! My writings are mostly women's fiction, most also suitable for YA. My website is www.dawnlajeunesse.com. Come visit me there!
View all posts by Dawn Lajeunesse →
This entry was posted in Uncategorized. Bookmark the permalink.