A lot has happened since January, when I began posting topics related to my new project about Armenians: the genocide, mass migration by survivors, and the generations of Armenian Americans they produced. That project is a long way from done, since I’m still in the research phase and haven’t begun to do any actual writing. All in good time.

Meanwhile, after a string (yes, a LONG string) of rejections by publishers and non-responses by agents, I’m happy to say I have a publisher for The Eyes Have It!!! Currently still in negotiations, I will provide updates in the coming weeks and months.

While I’m still happy-dancing, I’m also still immersing myself in experiences that feed my Armenian soul (in more ways than one!). Yesterday, I joined 15 or so women (and one man) at St Peter’s Armenian Church for a day of making Cheoreg (an Armenian sweet yeast roll) in preparation for their massive annual festival on June 1 and 2. What fun! Their stories abound, and vary from a recent immigrant from present-day Armenia, to a woman who was adopted as a baby and raised in an Italian family. She didn’t know she was Armenian until she took an ancestry DNA test! She now knows she’s 50% Armenian and 50% Italian. She’s searched out and met some of her Armenian relatives, most of whom didn’t know she existed (and for the few who did, she was a “family secret.”) These gatherings to prepare for the festival continue throughout the month of May. I’m signed up for only 2 more, due to a packed schedule. But if any time opens up, I will be sure to sign up for more! Yesterday’s efforts yielded 1039 rolls: 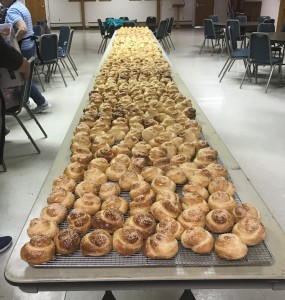 And because we packaged them 6 to a bag, there was one left over. One roll, torn into 15 pieces…but that tiny piece was pure heaven!

I, like so many others, am a novelist struggling for recognition. MY NEW NOVEL, THE EYES HAVE IT, IS AVAILABLE ON AMAZON AND B&N! In Her Mother's Shoes was published in June 2013 - available through Amazon, B&N and iPad, e-book (only $2.99!) as well as paperback. Autumn Colors was my first. My third novel, Star Catching, was released in November, 2016 and has been very well-received! My writings are mostly women's fiction, most also suitable for YA. My website is www.dawnlajeunesse.com. Come visit me there!
View all posts by Dawn Lajeunesse →
This entry was posted in Armenians, Blogs, Books, Publishing, Writing and tagged Armenian cooking, Armenians, Blog, Books, Inspiration, Publishing, writing. Bookmark the permalink.